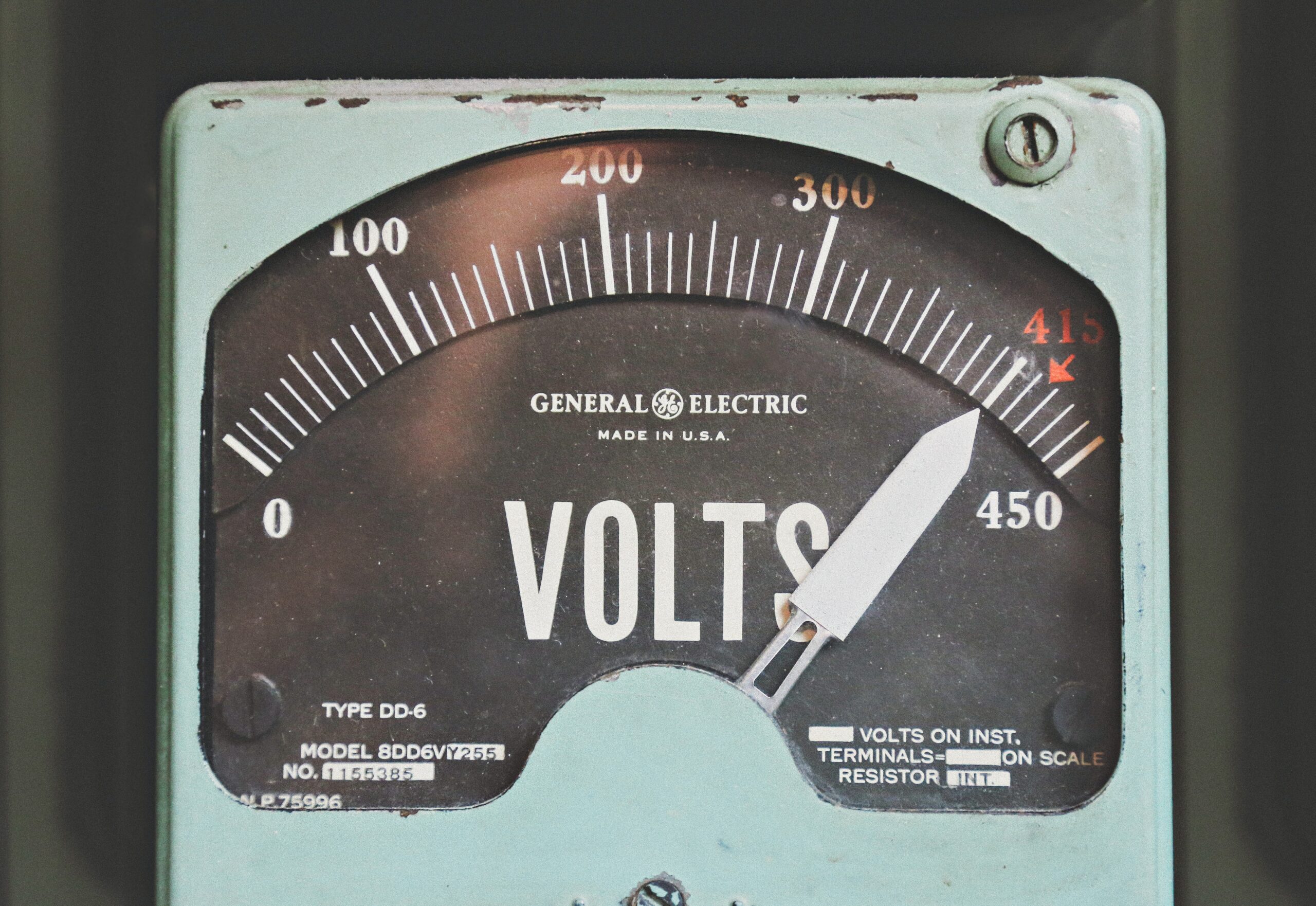 Photo by Thomas Kelley on Unsplash

In this post I want to talk about the aircraft electrical system, and some basic knowledge that a pilot should have about it.

A student pilot entrusted with responsibility for a single engine piston-powered training aircraft such as the Grob should know it has two sources of electrical power: the alternator, which is driven by the engine, and the battery.

The battery provides power to start the engine and to power the things that need electricity (radios, transponder, some of the instrumentation) while the engine is stopped, or if the alternator isn’t working properly.

Under normal circumstances, and with the engine running, the alternator produces enough power for all the electrical loads and to recharge the battery, if it needs recharging (for instance, to replace the energy that was used to start the engine.)

Batteries are two terminal devices. In the Grob, the battery is a 24V lead-acid type. That means when it’s charged the voltage on the terminals is close to 24V (somewhat dependent on temperature). To charge the battery you apply a voltage higher significantly higher than 24V to its terminals: the typical output of the alternator is about 28V when the alternator is working correctly.

Both those meters have a green arc on the dial. Typically in aviation a green arc on a meter shows the “normal” range. The best way to think about the green arc is that if an indication is outside the green, something is up, and the pilot had better understand what, and whether action needs to be taken urgently or soon.

But if an indication is inside the green arc, it doesn’t mean that everything is ok and that there’s nothing that may need to be fixed, nor any action to be taken. The best you can say is that if the electrical indications are in the green then nothing bad is going to happen in the next few minutes. If you’ve just taken off (“gauges green!”), you’re busy with ATC, you’re in turbulence, or engaged in map-reading, that may be good enough, for the time being.

Longer term you should understand what indications you expect to see on your electrical system and whether they indicate any issues that while not immediately hazardous might need some decision-making. The needles might be in the green, but something might still be wrong.

In this next section I’ve put some photos of the voltmeter and ammeter in the Grob showing different electrical conditions. 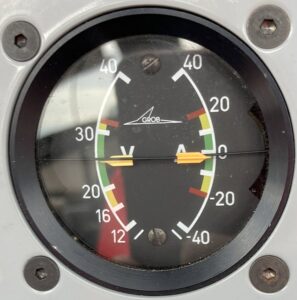 This is what you should see on the ground with a fully charged battery when you put the electrical master switch to ‘on’. The voltmeter is showing just a bit above 24 volts, and the ammeter shows a slight electrical drain on the battery (most likely from the electrically powered turn coordinator.) 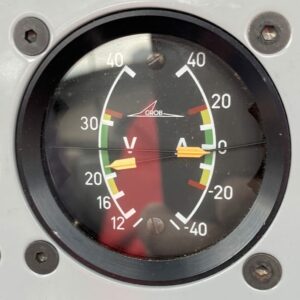 This is what you might see after switching the battery master on if the battery isn’t properly charged. (Did someone accidentally leave the master switch and radios on after this morning’s flight?) The battery voltage is down to about 22V, which, for a 24V lead-acid battery, is nearly discharged. You’d want to investigate why this is. It may be that it’s even too flat to start the engine.

Assuming the battery is fully charged, here’s what you should see a second or two after starting the engine. (I know, at this time you’re probably too busy checking the oil pressure is rising and leaning the mixture for ground idle to have time to look at the electrical gauges, and rightly so. But if you did look this is what you’d see.) 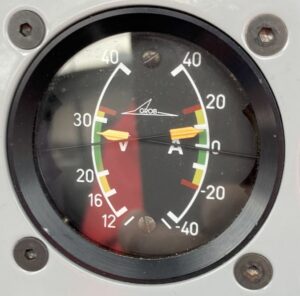 The bus voltage has risen to 28V, indicating the alternator is now online and producing electrical power, and the ammeter is showing a positive charge of about 10A into the battery replacing the energy that was used to spin the starter. Within a few seconds the current drops, and after a minute or two you should find the gauges show the next picture. 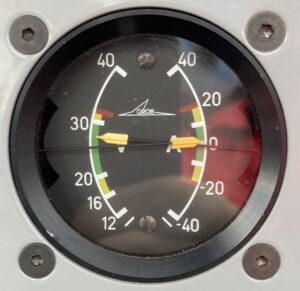 In this picture, the bus voltage stays at 28V and the current into the battery has dropped back to almost zero because it has reached a state of full charge. Regardless of what electrical loads you use during the flight (even all the radios, the pitot heat, fuel pump and landing light, all together), the indications should stay pretty much the same. No current should flow out of the battery because the alternator provides all the required current and the voltage should stay close to 28V as maintained by the voltage regulator inside the alternator. 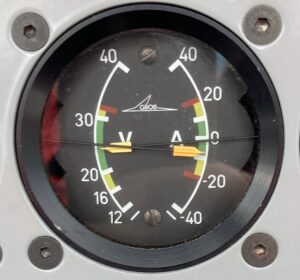 In this picture you can see that the alternator is offline, because the bus voltage is only 24V. Electrical power is being provided by the battery, which is clear because the ammeter shows a battery discharge. It’s likely in this case that the alternator circuit breaker (labeled “generator” in the Grob) is open-circuit (popped out), or the voltage regulator in the alternator has failed completely, or there’s some other fault.

Both needles are still in the green but if you don’t do something, eventually the battery is going to go flat, you’ll lose the ability to operate the radios, and the transponder will stop working. Nor will you be able to lower or raise the flaps.

From this picture it’s likely that you noticed the fault fairly soon after it occurred because the bus voltage is still a healthy 24V. As the battery discharges the voltage will drop lower and lower.

How many more minutes or hours of useful electrical power you have depends on the health of the battery, what load you’ve been drawing, and how long you’ve been running it down. (How long has it been since you last verified the electrical system was working correctly?) At this stage you should shed any excess electrical load, by turning off the second radio, GPS (unless you really need it), and probably the transponder too unless you’re in transponder airspace. If you’re on a cross country flight and far from an airport you could turn both radios off, except when making position reports. That way you’ll save the battery power to run the radios and transponder for the ten or fifteen minute period prior to your arrival at a sensible destination, as well as the flaps for landing.

And if you’re arriving at a controlled airport it would be sensible to tell ATC on first contact that you have an electrical issue. That way if the radios do die before you land and you lose communications they will know why and not just think you’re being a doofus.

If you see the alternator circuit breaker has popped out during flight, should you reset it?

Generally speaking no. Circuit breakers are there to open a circuit and shut off the current if too much current is drawn, as it would be in the case of a “short-circuit” wiring fault. Opening the circuit prevents any overheating that can lead to an electrical fire. It’s possible that a defective circuit breaker can open without an electrical fault being present but the time to consider and test for that is when the aircraft is safely on the ground and, if the worst comes to the worst, you can open the canopy, get out, and run away. Better to leave the breaker open and change your flight to terminate at a nearby safe airport while conserving your battery power as best as you can.

Overall, an in flight electrical failure of this kind is not an emergency but it’s definitely something you have a responsibility to detect, sooner rather than later, so you can exercise appropriate decision making.