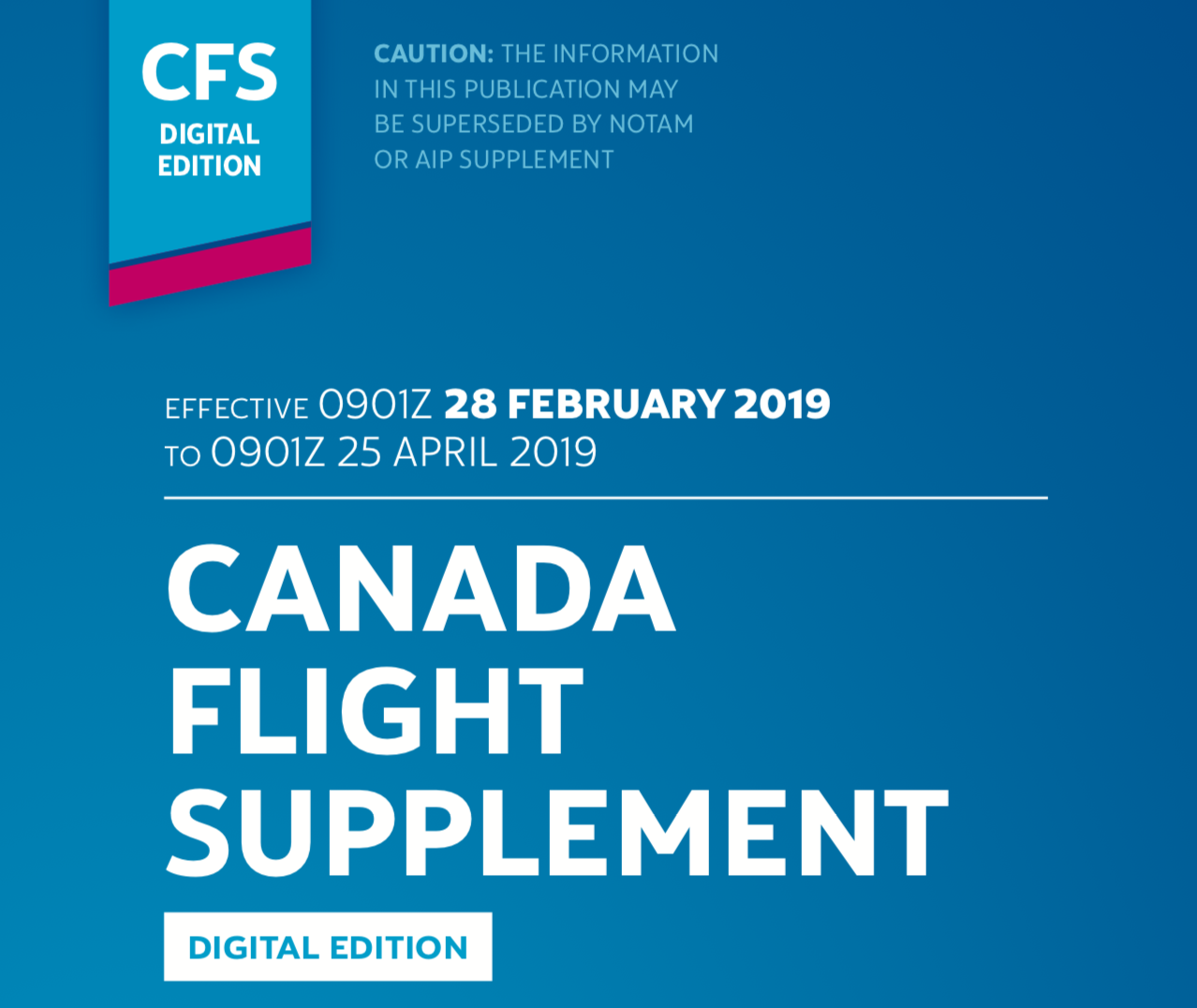 What is the CFS?

The Canada Flight Supplement (CFS) is the official bible of aerodromes and airports in Canada, and it’s an essential publication for students and licenced pilots. Produced by NavCanada, a new edition is published every 56 days (8 weeks).

The CFS has six sections:

The CFS is available in print, on some Electronic Flight Bag (EFB) software products, and also, more recently, in a standalone PDF file edition.

The benefit of electronic versions are they’re much easier to keep up to date: most pilots who rely on paper don’t bother to buy a new edition very often, so they risk relying on some information that has changed since their old paper copy was printed.

When do I need it?

According to Transport Canada’s publication among the things you are expected to provide for your flight test are “current editions of appropriate aeronautical paper charts and Canada Flight Supplement”.

And, as part of exercise 23 (Pilot Navigation) on which you are marked, “assessment will be based on the candidate’s competency to: … (a) use appropriate and current aeronautical paper charts and other current flight publications including … the Canada Flight Supplement (CFS) to extract and record pertinent information”.

So it’s obvious you have to both bring the CFS to your flight test, have a good idea what’s in it, and be able proficiently to use it.

Beyond the world of flight tests and exams it’s also important for every pilot to have ready access to the information in it (which is, of course, why it’s part of the flight test.)

CAR 602.60(1)(b) says you can’t take off in an airplane unless you have on board “all of the necessary current aeronautical charts and publications covering the route of the proposed flight and any probable diversionary route, if the aircraft is operated in VFR OTT, night VFR flight or IFR flight;” – so on that basis you don’t have to fly with the CFS on board during day VFR conditions. But it’s not a bad idea even if not compulsory, and you’ll still want to have access to it for flight planning.

Can I use a pdf or other electronic version on my flight test?

Really it’s up to you. There’s no rule that says you have to use a paper copy. If you have Foreflight or something similar, or a pdf of the CFS, that’s acceptable. But whatever source you use it must be the version current at that date.

Personally think it’s probably better to use an EFB, even for your flight test, or a pdf file. It’s most likely what you’re going to use after you pass your flight test, and I think where possible flight testing should be about real life skills. Practice – and be examined – on how you’ll actually fly.

As a matter of fact using the CFS on a tablet can be less convenient than having a paper copy: you can’t thumb through the pages as easily, or put post-it notes next to airports of interest. Again, that’s why I think you should learn and practice with the system you’re most likely to use in real life.

What if the batteries go flat, or my iPad gets struck by lightning?

There are all sorts of problems that can crop up during a flight, and losing access to the data in the CFS isn’t at the top of the list of things to worry about. Firstly you have probably copied out that relevant data for your destination to have it more easily to hand when you arrive.

Secondly be aware of other sources of the same information: most GPS receivers will give you all the information about your destination and other nearby airports.

Also you can keep a copy of the CFS on your cellphone, and consider bringing a spare battery pack for your iPad or tablet.

Where do I get it and how much does it cost?

Some of your options for getting the paper and electronic versions of the CFS are as follows:

FIrstly you can buy a paper copy from an aviation bookstore, an FBO or flight school. AvWorld claims to sell it for $17.89 but they’re showing out of stock at the time of writing.

Secondly you can order it direct from NavCanada: a year’s subscription to the paper copy is $99, and individual editions are $29. If you want the pdf then it’s $16.50 per province on a subscription basis. The NavCanada store is here.

Thirdly Foreflight includes it with its Canadian data subscription.

Finally if you’re an impecunious student, or just curious, if you google carefully you may be able to find a link from which you can download the current pdf files. As far as I know NavCanada doesn’t permit anyone to distribute it for free but that’s like to remain the problem of the company that’s hosting the links to it, and not of anyone who downloads it.

Who do you bring with you when you fly?
Website: rucsoundings.noaa.gov